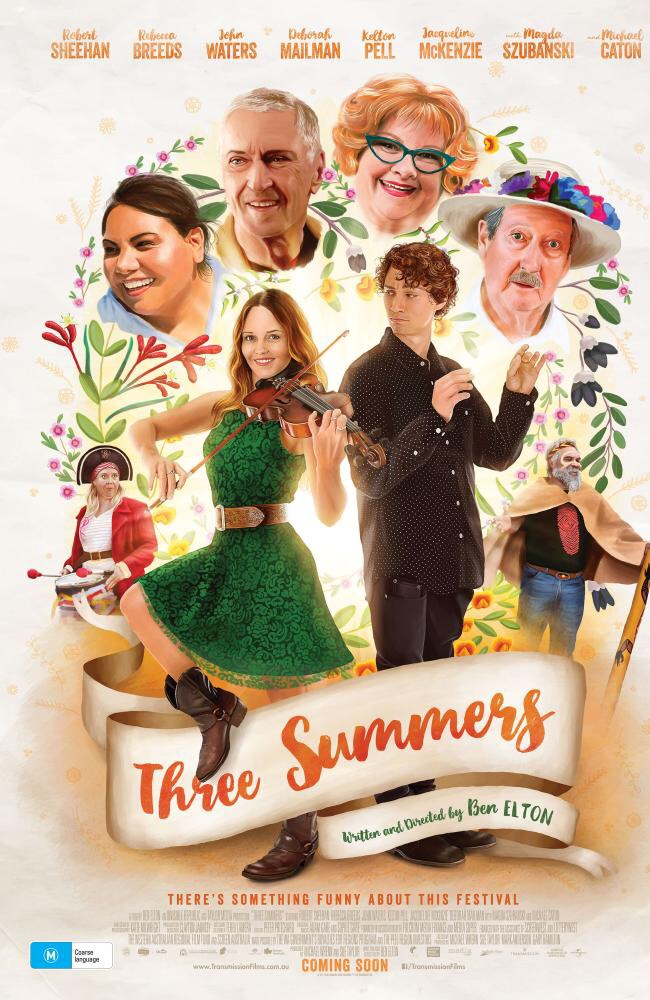 “We need to understand other people’s stories before we can understand our own.” So says Michael Caton’s character Henry in the new Australian film Three Summers, written and directed by Ben Elton. Stories are what drives this film, set over three summers at a fictional music festival in Western Australia. It focuses on two young musicians and their developing relationship, but uses the setting to incorporate multiple other storylines through the festivals performers and attendees, such as a young refugee and his foster parents, an Indigenous dance troupe and their leader, Morris dancers, with Caton’s character as their leader, and his granddaughter who rebels against her workaholic mother. It’s billed as a rom com but makes pretty clear comments about the importance of understanding other people and appreciating the diversity of modern Australia.

Three Summers doesn’t hold back on the cheese- nearly everyone gets a happy ending, particularly its main characters Keevey (played by Rebecca Breeds), a fiddle player in a pub band, and Roland (Robert Sheehan), theremin player and part-time dog washer. The typical rom com vibe is saved from overkill though, thanks to the quirky supporting characters, some of whom seemed unnecessary (the camper van couples who didn’t actually go to the festival for instance) but some of whom brought unexpected comedy (such as the conservatoire director and her dramatic response to using a port-a-loo: “I would rather die.”) The film has received mixed reviews; while it’s not a hard hitting social commentary, I found it to be both a positive step toward encouraging tolerance and an actually decent Australian romantic comedy, both excellent reasons to watch this film.

I think we need to appreciate that we have a well made Western Australian film in Three Summers. The filmography of the landscape, all-Australian soundtrack and cast of well-regarded actors make this a technically good film, which is a feat in itself given the struggle to get funding for Australian films. The fact that this is specific to Western Australia, and in fact regional WA, makes it more impressive. While the music festival ‘Westival’ is fictional, it is filmed at Fairbridge Farm, where the real Fairbridge Festival takes place each year. Other nods to the WA setting include the mention of ‘Rockmantle’ council (presumably after Rockingham and Fremantle, where Elton has lived for several years) and a band called the ‘Warrikins’ (or Western Australian rikins as one character mistakenly calls it). While Elton could have used a more generic setting, he is generous with the local references, which helps develop the story without alienating non-WA viewers. I personally think Australian films work best when focusing on individual stories and part of the joy of this movie is that it shows ordinary Australians who just happen to be at a music festival in WA every year. Plus, this is a state who found a migrating seal on the beach and dubbed it Steven Sealberg; puns were not going to be wasted on local audiences.

As an English teacher, I’ve noticed that as much as the curriculum likes to talk about ‘representation’, realistic representations of Australia, particularly Western Australia, are hard to find. While we have gems such as Tim Winton, much of our literature and film are focused on the rugged landscape. The same goes for rural Australia, which, if you take popular texts as truth, is basically one big crime scene. Some reviewers criticised Three Summers for not being realistic enough, but, while a Morris dancer denouncing his former racist views and suddenly applauding an Afghani folk group for their bravery may be idealistic, Elton doesn’t make mistake grit for realism. Three Summers is open about the fact that we don’t all agree with each other, while gently pointing to better options than continuing to argue and alienate one another. It’s the kind of reality I see everyday- imperfect people with diverse backgrounds trying to get along. We don’t need all texts to be like that, but it was a refreshing change to have someone familiar with our culture present us as we are.

I think there can be a danger in only being shown, whether to the world or ourselves, as either stereotypical happy-go-lucky Australians or hardened outlaws. It misses out on the reality of people’s experiences and means that our social issues aren’t always taken seriously. Given we’re currently being criticised for our human rights in regard to asylum seekers, we need to be held to account. One reviewer said they were concerned with the image this film portrayed to the rest of the world- frankly, I think we should be concerned- not with upholding our reputation of little Aussie battlers, but with doing right by the people in our own country. We need more stories about real Australians living in the 21st century. Elton’s representation of these Australians may be romantic, but the film addresses real issues while making people laugh and showcasing a part of the world that doesn’t get shown off very often, which is worth the watch.